Today is the anniversary of 9-11.  I can't help remembering, like I am sure millions of others are doing, where I was and what I was doing that day.

I was about 7 months pregnant with Sebastian.  I was still working for the Niagara Parks Commission, at what was then "Feather in the Glen" (now it is an outlet for the Whirlpool Jet Boat tours or something).  My co-worker Anne and I opened the store and were looking forward to a nice, relaxing day- Labour Day was over, most of the tourists had gone home, our hours were reduced to a nice 9-5 day.  I remember it was sunny and a little cool, but still beautiful.

We were standing at the counter, shooting the shit, when a customer came in, and asked us if we had a TV.  Of course we didn't, but we had a radio.  He asked us to turn it on, because he heard something strange when he was driving and he didn't know if it was a joke.  Anne went to get the radio in the back room.  That's when the phone started ringing.

First, it was our manager, Shelley, who was off and watching TV at home.  She told us ...well, you all know what happened.  I remember thinking in the beginning that "whatever, no big deal".  Of course, as the day went on, the deal got bigger and bigger.  My mom called shortly after, followed by Anne's mom and husband.  Between them and the radio, we kept up with what was happening.

Anne and I thought about asking permission to close the store down, but knew we probably wouldn't get it.  We actually became a kind of pit stop for people.  Some hadn't heard anything, so when they heard snippets from our radio, or the people that were inevitably gathered around it, they would ask, and we would fill them in.

The Asians, and Europeans really didn't seem to care.  Can't say I blame them.

The Americans, though.  They were hard to watch.  A couple had friends and family in New York, and the panic you would see on their faces was heart-wrenching.  Just an overwhelming feeling of uselessness- the complete lack of ability to do, or help anything.  We all felt it.

Of course, through the day, there were wild and crazy rumors..planes crashing into Camp David, planes headed to Las Vegas, the army mobilizing to shoot down anything that moved.

Late morning, early afternoon- someone had the bright idea to list what they thought the next potential target might be.  They were listing symbols of America- the Statue of Liberty, the White House, Mount Rushmore.  Then they started listing sites that would do the most damage to the American way of life.  Nuclear power plants, missle and weapon depots, hydro-electric generating stations.

Stations like the Sir Adam Beck Generating Station. It supplies power down the eastern seaboard of the States.  Hitting that would wipe out power to major cities like New York, Boston and Chicago.  Mass panic, looting, just general horrible-ness.

Sir Adam Beck was just over a kilometre from where I worked.

Anne and I talked about this, and decided it wasn't likely, and there wasn't much we could do about it if it was.  What I didn't count on was Geoff- 2 months away from being a father, listening to the same radio show, at work in Beamsville and building up to a full panic.

He told his boss that his wife was working just down the road from that last place they mentioned- oh and she's pregnant too.  His boss told him to hit the road, and he did.

When he showed up, I was shocked (well, not really, cause he hated his job and would have done pretty much anything to get out of it) and touched.  I convinced him that I wasn't going anywhere and that it was all hokum.  He settled down finally and stayed for a while, to listen and wait and wonder right along with us.

The rest of the day was pretty much the same.  We listened until we closed up shop, then went home and watched it all unfold in endless replays and closeups.  For days afterwards, it consumed all of my free time.  Maybe it was the hormones from the pregnancy, but it hit me so hard.  I would sob each night, watching the tv, and the mothers and fathers and brothers and sisters and husbands and wives, searching through rubble and just crying in the streets.  I couldn't stop crying (and to this day, I choke up a little) when I saw the firefighter and cops writing their Social Security numbers on their arms and legs, so that they could be identified when and if they were pulled out of the wreckage.  I was a complete basket case when they talked to the wife of one of the men that rushed the cockpit on the flight that went down in Pennsylvania.  Hearing her accounts of the last conversation with her husband, just before they brought the plane down,  knowing that they would never talk again...I can't imagine that courage.

Finally, I turned the TV off.  I had too.  I couldn't take it anymore.


Anyway.  It's been 9 years.  Lots has changed.  But today, I'm thinking back.  Remembering.  Crying a little, one more time. 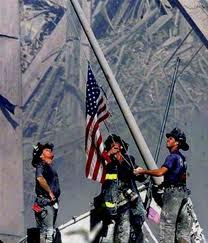