As all of our extracurricular activities are winding up in time for the holiday season, I am finding myself with a smidgeon of free time.  I am often torn at what to do with that time- cleaning, laundry, playing, knitting, watching movies, take a bath, reading...so many choices.
Because of my "adrenal fatigue" (according to my naturopath) I am trying to choose "me" things more often.  Whether that is vegging in front of the TV (doesn't happen often, because the movies I like are not often kid-friendly) or knitting or reading..it should be something that I really want to do.  Reading tends to win out more often than not, because I can often do 2 of my favorites at the same time- read in a hot bath.  Ah.  That is my idea of heaven.  I love it. 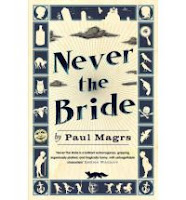 Since I am reading again,  I want to make sure that I am making good use of my time.  I don't want to invest the small amount of time that I have in a crappy book.  Barb leant me 2 good ones by Paul Magrs, "Never a Bride" and "Something Borrowed".  Quirky and different, with a supernatural twist.   Very cool..I am enjoying them very much.
I also like the Outlander series by Dianna Gabaladon.  Romance and sex and war and history, all with a brutal scotsman...love it.  I have the latest book in the series and there is a new graphic novel out that I want to check out, so that would be good too.

Also, because I live with Geoff, I often have comics around.  Geoff is pretty careful about giving me ones that he thinks I will like.  That's how I started reading "The Walking Dead" years ago.  With the new TV show out, I have had the itch to go back and re-read it.  Same for "Fables".  All about fairy book stories come to life, often with suprising twists.  Both really good, and good to re-read.
Of course, with the release of the new Harry Potter movie, I am thinking about going back to the beginning and starting the series from scratch.  Reading the first couple of books brings back amazing memories, from when I first discovered the series.  It was Christmas of 2000, and Geoff and I were celebrating Christmas in our first home.  We were broke, of course, but happy. I got the first book on the reccomendation of a friend, and read it in a night (probably a matter of hours).  When I finished, I told Geoff that we were going that night to get the rest (up to Book 4 was available).  We did, and then we both started devouring them.  I remember each of us laying on a couch, reading Harry Potter all night, while huge, fluffy snowflakes fell outside and the Christmas tree twinkled between us.  It was a great time, and it is a great story. 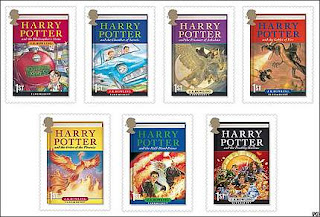 There are other series that I love too- The Wheel of Time by Robert Jordan (and even though he is dead,  books are still coming out!), the Belgariad and the Mallorean by David Eddings. I have my favorites of all time- To kill a mockingbird, The Birthhouse, I, Vampire.  I like my junkfood books, like the Judy Garwood romances.  I can read one in about 3 hours, and it is just like a bad-for-you snack...just fun.
But ultimately, when I look to re-read something, something that I loved...I usually turn to Stephen King.

He's the king for a reason.  He tells a scary-ass story.  I just finished Under the Dome.  I haven't liked alot of his newer ones (I seem to prefer King's writing when he is all fucked up on coke) but this one harkened back to his older ones.  I just leant my boss The Shining and IT, two of my favorites.  My boss, Jamie, thought he had read Stephen King.  When he told me one of his favorites was Needful Things, and that he hadn't read The Stand, I almost lost my mind.  I am weaning him in slowly, but I think I will get him hooked.  He in turn lent me Under the Dome and introduced me to Locke and Key, the comic written by Steve's son, Joe Hill.  It was good and bloody and scary.  Nice.

So anyway, Stevie and his stories.  He has actually made me have nightmares.  I remember reading Salem's Lot one weekend, when Geoff had gone away to Chicago for the comic convention.  He came home to every light in the house on, and when he tried to turn them off, I woke up and yelled at him not to.  When he asked why the lights had to be on, I replied "vampires" and went back to sleep.  I am a lame-o.  But the story is really scary.

Of all of his stories, I think The Stand is my favorite.  I am not dissecting it here, or getting into all the reasons why.  Suffice it to say, I love the book, most of the characters (I never liked Frannie, but LOVE LOVE LOVE Stu.) and I re-read it on a regular basis.  It inspires me to daydream what I would do, when the plague, apocolypse, zombie infection etc comes.  Cause I will be a survivor.  How could I  not be???
If you are reading this, and you have never read a Stephen King book or short story, do yourself a favour.  Read one.  Start with the early ones...you really can't go wrong.  Carrie, Christine, Cugo...all good.  If novels aren't your style, start with a story.  The Richard Bachman stories, Rage and The Long Walk are good.  So is The Mist, and Rita Hayworth and the Shawshank Redemption and Apt Pupil.
So, at this point, someone, somewhere is saying "I don't have to read that, I saw the movie."  Do yourself another favour.  Don't see Stephen King movies.  They are shite.  I can never understand anyone that says the movie version of IT is scary.  If you say that, you didn't read the book.  100 times scarier.  A million times.  Stephen King writes great stories, but they don't translate to the screen.  Some aren't bad (The Mist, Shawshank Redemption and The Green Mile come to mind, but that might be due to Frank Darabont more than anything else), but most are horrible.  Just stop, stop talking and read the book.

Ok, one last thought.  When I went to college, alot of the boys had come in from the east coast.  One boy, John, lived right on the border of Maine, and like we do here, they would often cross into the US to shop.  One day, he was in a record store in Bangor, looking at CDs, and he hears a voice behind him asking where all the "good music" was.  When the clerk asked what he meant by good music, the man replied "You know, anything recorded before 1979".  When John turned to look at some new music, in the "good" music section, he happened to make eye contact with this man.  In his words, the guy looked like a werewolf, just before the change.  He had a crazy, bushy black beard, wild hair, a bit of a beer gut, and piercing eyes.  He held up a Led Zepplin CD, winked at John and smiled, and walked to the counter to pay.  John always said that Stephen King looked just like a character from one of his stories.
I don't know how true that story is (we were drinking alot when he told me, and I think he was trying to get somewhere with me), but I love thinking of Stephen that way.  A little wild, a lot blue collar, and a wee bit scary, just to look at. 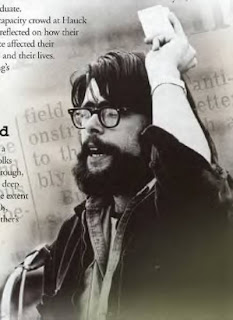