The other day, I was driving around with the kids, just cruising and listening to the radio.  "Beautiful Day" by U2 came on.

I am not really a U2 fan.  I don't dislike them, I am just not a raving lunatic for them, like some people I know.  I like some of their older stuff, like from Joshua Tree.  That's the stuff I heard when I was younger.

But Beautiful Day is different.

About 11 years, my family went through a really hard time.  The worst that we have ever weathered.  Some of you know, some of you don't and that's fine.  I will spoil the ending for you- everything turns out ok.  From the view of a decade later, I can honestly say that even though it was one of the worst things I have ever lived through, it was also something that saved our family. I don't know where we would be, if it hadn't happened.  I think he would have been lost to us, very possibly literally.  But as it is, he is with us, alive and well, and I am so happy and grateful for it. 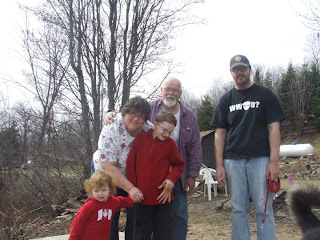 Anyway, when we were in the middle of the shitstorm, it was difficult to function on a daily basis.  My mom and dad were a wreck and I couldn't help.  Geoff didn't know what to do for me.  I couldn't speak to anyone without welling up, or breaking right down.  I really just wanted to pull the covers over my head and never see the light of day.

One day, I was driving home from work.  Geoff and I were living on Glenholme at the time, and had just moved in that May.  I was still working at the Parks, and I think Geoff was at Dufferin Games.   I was driving home, hardly concentrating on the road, just caught up in thoughts and wishes and hopes.  I actually enjoyed being at work, because it gave me something different to think about.  For 8 hours, I could pretend that all was well.  Some nights, I dreaded going home.

As I was driving that night, a song came on the radio.

"The heart is a bloom
Shoots up through the stony ground..."

I don't usually hear the words to songs.  Not at first.  It's the tune that catches me, the melody.  Something catchy, melancholy, haunting.  Something about the music is what I hear first.

But in this case, I heard the words.  And I understood.  It's about having the worst day of your life, and still knowing that it was a beautiful day.  About how bad it can get, and still seeing all the good.

Right then and there, I made a promise to myself.  I promised myself that I would never again cry over what was happening.  I knew there was more to come, and that it could get worse, much worse.  But I wasn't gonna cry.  I was going to look for my beautiful day.  I was going to cling to what was wonderful and the gifts that I still had.  I could see him, talk to him.  He wasn't dead.  Nothing is final.  Hope is everything.

So, from that day to this, I haven't cried about it.  Oh sure, I might get misty or well up when I talk about it.  I don't talk about it often.  I think I have only told a handful of people about it, that weren't present in my life at the time.  I'm not saying that it doesn't shake me to the core when I think about what might have been.  But I don't cry.  No sobs, no heartbreak.  Not since that day.

So, whenever I hear this song, I am back there.  In the car.  Heartsick, but still having a beautiful day.