Ring around my finger

So, I have been trying, for the last couple of weeks, to eat better and get healthier.  It has been going pretty well (I still a long way to go!) and I am encouraged.

I have set a few milestones for myself along the way, things that will help encourage me and keep me motivated.  I know it's a long road ahead, but I hope that if I am able to hit the marks along the way, I will stay the path and continue to try.

So, my first milestone is to start wearing my wedding ring again.

Geoff and I don't wear our rings.  I don't know Geoff's story (he would probably say that he just forgets, but I think it interferes with his ability to pick up girls. :), but mine is pretty basic.

Our wedding rings are exactly the same.  They are heavy and thick.  When I was wearing it all the time, it actually forced my baby finger out, so that it no longer rested against my other finger.  When I was in my last month or so of my pregnancy with Sawyer, I took the ring off, so that my hands and fingers, which are already short and stubby, wouldn't swell abnormally large, and I wouldn't have to cut the ring off.  And since, then, more or less, I haven't worn it since.

A couple of times, I tried it back on.  But since the nice little groove it had worn in my finger had been lost, it really didn't fit comfortably.  And then, after a while, it just didn't fit at all.  My fingers were too big.  So, it has been sitting in a cup, collecting dust. 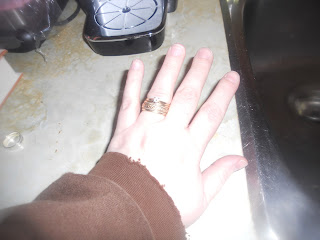