Last weekend, Geoff, the kids and I participated the Relay for Life in Windsor, in memory of Kit.  Geoff and Sawyer did the walk last year, Sebastian and I didn't, because he had surgery that same weekend.
We drove up with Dawn.  Geoff's mom headed up earlier in the day.  There was not a little bit of trepidation about this day.  Geoff's family has a whole lot of craziness going on right now, so there are lines being drawn in the sand.  Most people, with a few exceptions, seem to be picking sides.  And depending on whose side you are on, that seemed to determine whether or not you were coming to the event.  Drama.  Non-stop drama.  I tell you.

Anyway, we all headed up, not really know if anyone would actually show up.  Geoff's other sister, Holly had opted out, along with all her family for a whole list of reasons.  Geoff and I were determined to tough it out, whether or not anyone else was there, whether or not there was tension or anger or drama or anything else ugly and unpleasant.  We were there for a reason, and we didn't want anything to distract from that.  We felt we were doing the right thing for us, and that was really all that mattered.

As it turned out, however, there was a good showing.  Lots of our favourite people were there, and everyone was happy to see each other.  There really was no drama to speak of, so the air of tension gradually lifted and we all got on with the night.

Like I said, I wasn't at last year's event.  From what I heard, it was very raw and poignant.  Lots of tears and emotions.  Remember, Kit had only been gone a couple of months at that point, so wounds were still wide open.
This year wasn't like that at all.  Sure, there were emotions, a couple of tears.  How can there not be?  But for the most part, I saw smiles and laughter.  And that was ok with me.

I did my first lap and a half with Aunt Nadine.  I adore her.  We held hands, oh so very tight, and chatted and caught up on things.  She is always so interested in my kids, Sebastian in particular.  She has her own struggles, but she was so sharp and wonderful that night, I was honoured to have spent the time with her.

Dawn and I did more laps through the night.  Sometimes we had the chiclets with us, most times we didn't.  Dawn and I always talk.  So, we did what we do best.  We remembered, and discussed and gossiped and bitched.  We planned and laughed and bitched some more.

Geoff and I did a few laps together.  But mostly we walked separate.  I know that this is his chance to catch up with his family.  He wants to walk with his Uncle Terry, and his Aunts.  He wanted to have time to himself, just his music in his ears and his thoughts in his head.  I let him do what he needed to do. 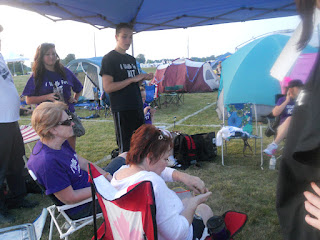 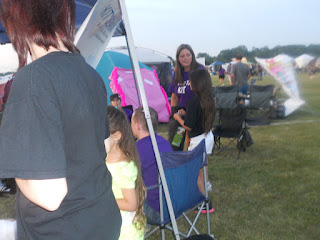 We brought a tent for the kids and I to sleep in.  We didn't have much of a plan for the next day- a couple of visits, but knew that someone had to drive us the 4 hours home.  I knew that person would be me, and because my kids were in the car, I knew I needed some sleep.

Once we had the tent up and the air mattresses blown up, you pretty much couldn't get the kids out of there.  It was like a trampoline and the dance party they were holding with just the two of them in there went on pretty much non-stop from about 830 to 1230/1am, when we finally got them to sleep.  I crawled in with them about 300am.  We were all back up around 530, and packed up and ready to go.

We paid a visit to Geoff's Aunt Lana and Tom the next day.  It was a lovely visit, bitter sweet at times, but we always love to see Lana.  And even though we woke her up (we did wait 2 whole hours, until 8am to finally knock on her door!)  she was gracious and inviting.

After that, we went to visit Geoff's grandma.    We haven't always been as diligent in the past about visiting as we should be.  Sometimes it's hard, since she isn't always the nicest person in the world to spend time with.  I don't mean to be mean by saying that, it's just true.

However, this day and this visit was LOVELY.  She was gracious and kind and was great with the kids.  Even though they were both exhausted and a little on edge, she handled them with grace and ease.  We got some lovely photos of everyone together.  The home where she lives was hosting a strawberry social, so we all got strawberry shortcake as well.  The visit was nice enough that I know we will visit again the next time we are down that way, and that it made me feel incredibly guilty for not visiting more.

All in all, it was a nice weekend.  Exhausting and draining, but nice.  I don't know what's happening in the future with the Relay.  It will likely fall by the wayside, like so many other things and eventually be forgotten.  Not the intent behind it, or any of the emotions, but the event itself.  It's a shame really.  But, that's life, I guess.

Anyway, I was glad I could participate this year.  Kit, I know you were watching, and wondering and probably shaking your head a a bit.  But I am sure you smiled a little as well.