Ok, ok, it's pretty much a cliche anymore, but I am going to say it.  I don't like clowns.  Never have.  Never will.  I don't find them cute, or funny or appealing.

John Wayne Gacy made it bad, with his creep factor of dressing like a clown for kids in the hospital when he was raping and killing men and boys in his home and burying them in the basement.  And the creep carried on when he continued to paint pictures of himself in full clown garb and sell them from his jail cell.
*shivers*
Then I watched Poltergiest when I was probably about 10ish.  The part with the clown, and the kid throwing his jacket over it, and then it ends up under his bed....yikes.  Triple yikes.  It was enough to scar me for life.  I still have trouble watching that part.  And I still don't let body parts, like hands and feet hang off my bed, partly for that reason.
And the last nail in the coffin?  IT.  I read it when I was in the 8th grade, when it first came out.  I love it, it's one of my favourite Stephen King books.  It speaks to me of remembering when I was young, and it was summer, and school and fall were a million years away.  When all you had was time and your friends meant everything in the world to you.  When I read it, I was pretty close to the same age as the kids in the book.  I got it.  I related.  It was me in those pages.  And Pennywise...well, he just scared the f*ck out of me.

I remember being up late at night, and my mom coming in for the 3rd or 4th time, because she could see the light under my door.  I would put the book down, and lay awake, thinking about the horrible thing I just read, but DYING to know what comes next.  So, I would risk the wrath of mom, flip on the bedside light and pick it up again.  I am a fast reader, but I finished that book in record time.

From then on, clowns and I had no business together.  None at all.

My friends know this about me.  Barb and Bill got Geoff and I a book for Christmas a couple of years ago, full of creepy clown photographs.  I can only flip through so much of it at a time, without getting the heebie jeebies.  They think it's funny to freak me out.  They are kind of jerks.  ;)

So, why am I talking about clowns?  Cause this weird thing happened to me today.  I had to got to the big  city of Toronto for a meeting today.  Val, who I work with, and I went up together.  We take the Go train most of the way, but it means a relatively short walk from Union Station to the office and then a walk from the office back to the train station.  Not a big deal, we can usually do it about 10 minutes or so.

So, we finish our meeting today in record time, and end up being able to catch an earlier train.  Val and I are hoofing it down the street, chatting as we walk, but making good time.  It's a route we have taken a bunch of times before, we know it well.  It's bright and sunshiney, and there are lots of people out and about.  It's the business section of Toronto, so there are suits and skirts everywhere.

Now, when we walk on the street, I really try to avoid walking on the grates.  You know, the big ones that the subway runs under?  I am always afraid that I am going to crash through and die a horrible death (irrational fear #21).  Sometimes though, I will force myself to walk on the grates, to try and prove that it is irrational.  Today was one of those days.

So, along we walk, her on the sidewalk, cobblestone and all, and me on the grates.  I didn't wear heels today, so I wasn't afraid of my heel slipping through and tripping me up.  I was watching where I was stepping though, and didn't lift my eyes off the sidewalk very often.

So, then I saw something.  In one of the grates.

It was purple, with a gold trim.  It was ruffly, like a big pouffy clown collar.  It was up near the top of the grate, and for all intents and purposes, it looked like a clown's upper back, with it's head just out of view.

Remember Pennywise?  He lived in the sewer.  No shit. 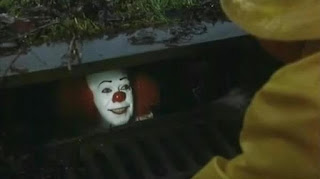 I did this weird prancy type jump, and skipped my way, not so gracefully, right off that mother-effing grate.  My breath caught in my throat and my heart did this weird skip beat thing.  My anxiety jumped from a non-existent 1 to a full blown 9 in about 2 seconds. I don't think Val noticed my weirdness, or if she did, she didn't say a word.

I know that there wasn't a clown in the grate.  I know that.  I KNOW that.  But I didn't look back, because I didn't want to see the white gloved fingers coming though.

I stopped walking on grates after that.  I stopped watching the sidewalk.  I don't know what was really down there.  I don't want to know.

All I do know is that I don't like clowns.