I have joined a dodgeball league.  I know, I know.  What the hell was I thinking? 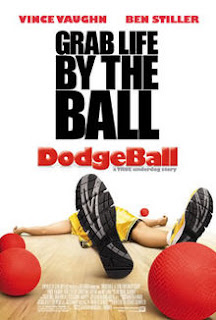 I had visions of my days in Grade 5, on a rainy day in gym class, happily throwing the ball back and forth with my friends.  Sure, sometimes it got a little rough.  Someone would take a head shot and call "No Fair" and soon, all would be well again.  You just played and played until your class was over and everyone went home friends.

It is a team through work.  At my work, the vast majority of the employees are women.  We are, most of us, unsatisfied in our working environment.  We harbour lots of aggression and anger in our little girly hearts. So the idea of throwing balls at other people as hard as we can, really seemed to appeal to the women I work with.  The result of that, we have a dodgeball team with 14 people.  Twelve of those people are women.  LOL...yeah, we are that team.

Tonight was our first game.  Most of us have no idea how to play, other than to throw the ball and not get hit.  The nuances and strategies of the game are lost on us.  We came to smash skulls.  Pure and simple.

The other team we played was made up of university students.  Young.  They had 2 girls.  The rest were guys.  Guys that liked to throw fast and hard.  Guys that had played before. Guys that really wanted to win.

The ref gave us a quick run down of the rules.  I played the first game.  My hands were shaking, I was pretty jacked on adrenalin   I was nervous and afraid of getting hit.  I didn't know what to do or how to do it.  I forgot about my positive reinforcements, and thinking good thoughts, and just worried about not embarrassing myself.

To start the game, you put your hand on the back wall.  All the balls are lined up down the middle of the court.  The ref yells out "3, 2, 1...DODGEBALL!"  Then each team takes off like a bat out of hell, towards the line.  Each team has balls in their colour (the other team was team blue ball.  An urban myth, I'm sure.  We were team rainbow balls.  I know, we all giggled about it). 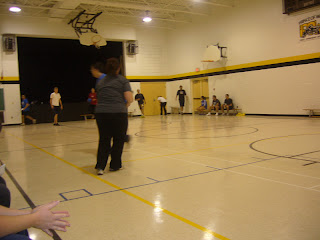 Once you grab your balls (OK, seriously.  I am going to say that word a lot, so it is time to get the giggles out of your system, and be an adult. :) you have to move them back past the scrimmage line, in order for the ball to be active.  You can't throw it until you get it past that line.  Once you are back, then you can throw away.
We learned alot in the first couple of games. To try and catch the ball as much as possible.  That lets you knock an opposing player out, and bring one of your players back in. Throw the ball low, aim for the lower legs and feet.  Those kinds of balls are harder to catch.  You need to gang up on the good players, throw at them from multiple sides all at once, preferably while they are winding up to throw.  You need to move your feet.  It really is all about the dodge.
So, when all is said and done, the team that still has players on the floor, when the other team doesn't is the winner.  You get a point for every person that you have left.

But honestly, we had fun.  The whole team laughed through the entire hour.  The ref thought we were hilarious and laughed along with us.  Even the other team cut us some breaks.  They were good sports.  By the end of the night, we were all a little beat up, sore fingers and shoulders and wrists and arms.  We were more sweaty than we expected.  But we had a blast.  I cheered and clapped and joked whenever I sat out, and I played hard whenever it was my turn.  I could say the same thing about everyone.

It was a good night.  A good time.  So glad I joined.
Here's hoping we score a point this season.  Just one.  Not so much to ask.