Last summer, 2012, was the "Summer of Bruce" for my sister in law, Dawn and I .  We saw him in Cleveland in April, in Toronto in August and in Hamilton in October.  For those of you that don't know which Bruce I am talking about, that would be Bruce Springsteen.  Or Uncle Bruce as we like to affectionately call him. 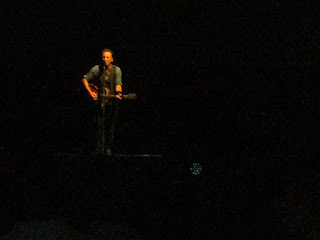 I have loved Bruce Springsteen since I was a kid.  One of the very first albums I ever owned, along side Karma Chameleon by Culture Club and Purple Rain by Prince, was Born in the USA.  I would play that album constantly on my parent's giant floor model record player, dancing in the basement. 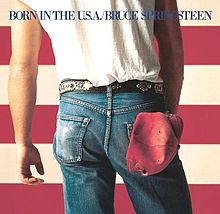 I wish I could find it, but I vividly remember writing a journal entry about Bruce when I was about 15 or 16 years old, after having watched the Dancing in the Dark video (yes the one with Courtney Cox).  I don't remember the specifics of it, but I do remember the last line that I wrote was "Bruce Springsteen makes it cool for guys to dance."  He did.  And he still does.  Take my word for it, the man has moves.  He still works it. 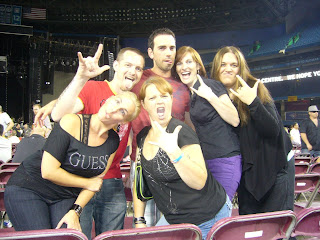 I have trouble deciding on my favourite song of his.  There are so many.  I love different ones at different times.  Of course the popular ones are great- they are popular for a reason- Born to Run, Glory Days, Thunder Road...all amazing.  The older stuff is great- the Born to Run album and Darkness on the Edge of Town have some amazing tracks.  The River, Badlands, Jungleland, 10th Avenue Freezeout, Rosalita (which I dance to with my Rosie.  I tell her it is her song.)  And they tell amazing stories. 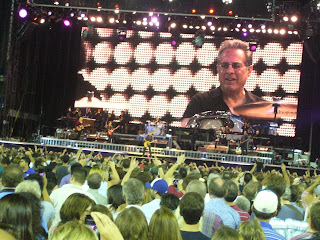 And I think that's what I love about Bruce and his songwriting.  His songs are stories.  He is blue collar, and intelligent and wordy and dark.  His songs are almost impossible to sing along with, because of the words and the phrases and texture of them.  I remember reading an interview with Stephen King, from back in the late 80's.  He had been asked who he would like to see play the different parts in The Stand, if it were ever to be made into a movie (and of course it was).  He said that had always envisioned Bruce Springsteen playing Stu, that even though he is from New Jersey, he has that classic everyman, southern, good old boy quality that would represent the true nature he had tried to write into Stu.   I was upset when Gary Sinise was the one that eventually did.  :(

So, anyway...I digress.  Summer of Bruce.  Back on track. 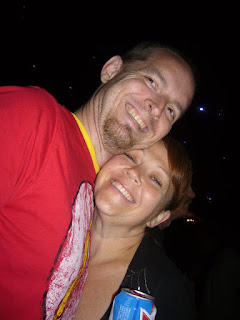 Last year, Bruce released a new album- Wrecking Ball. Dawn and I got the album early, so that we would be at least a bit familiar with the songs by the time we saw the first show in April.  We loved it.

The tone of a lot of the songs is very much like his old stuff.  Both of us were instantly drawn to some of the songs- Jack of all trades, Death to our Hometown, We are alive- all of them have the ability to send a chill up my spine and had me dancing and screaming and singing and yes, even crying in my seat at every single show.  But the biggest and the baddest of the songs was the title track, Wrecking Ball.

If you have never been to a Bruce Springsteen show, you need to go.  I can't explain it to you fully.  It is 3 1/2 to 4 hours of Bruce and the band.  No opener.  No pyro.  Sometimes he turns the house lights up and just lets you scream your guts out along with him.  He could bring the crowd up to heights of hysteria, and glory, that would have you dancing in the aisle, high-fiving strangers and jumping with all your might.  He can bring the crowd back down, so that you dance and sway with 20,000 other like minded fools, eyes closed, heart broken.  And when it's you in the middle of this, worshipping at the house of Bruce (sorry for the blasphemy, but it well and truly feels like a religious experience.  At least to me, it did), when you give yourself over to it, it is as freeing an experience as I have ever had.  It may not be this way for everyone (in fact, I am quite sure that it isn't, that it is just me) but for me, I will go back again and again.  As long as I am able. 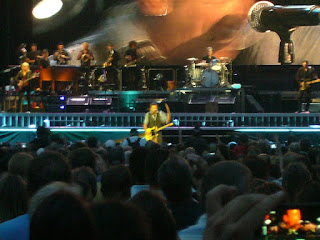 For Dawn, it was poignantly emotional.  With her dad's passing, Bruce and his songs have become a personal connection to Kit.  I feel it to, but obviously not as deeply.  It was rare for her not to be emotional when certain songs came on. It was a difficult journey for her, but one worth travelling.  We went different reasons, but we always went together. 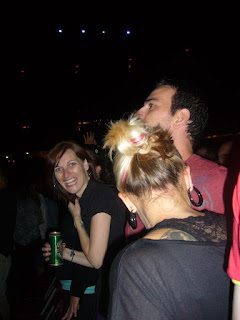 Since Dawn and I had this amazing exerperience together 3 times over the year, we decided we needed to commemorate it.  And how do we honour something like this?  Why, we do it permanently in ink in our skin.  That's how.  :)  Yeah us.

Dawn and I puzzled and puzzed until our puzzlers were sore.  How best to do this? Early on, we agreed that we wanted to have his signature and lyrics.  It was then on to the task of picking which lyrics.  I originally had suggested a favourite of mine from Thunder Road..


"Have a little faith,
There's magic in the night."

While we both loved it, since he didn't play Thunder Road at any of our shows, it was hard to memoralize the Summer of Bruce with a song that we never actually heard live.

What does it mean?  To me, it does nothing more or less than summarize my life.  My hard times come and go, over and over and over.  But guess what?  I got this.  I can do this.  Bring on your fucking wrecking ball.  Do your worst.  :)  Hells yeah. 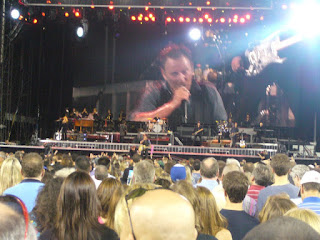 I picked an amazing font, that pays homage to the Darkness at the Edge of Town album cover. 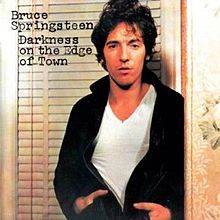 We did it today.  Like the rest of the summer of Bruce, we did it together.  It was great, and it's beautiful.  I will post a picture as soon as I am able.  It's on my back and I can't take one myself.

Thanks, Dawn.  Any time, any where.  The next Bruce show- I'm there, right there with ya.