Geoff and I, in an attempt to be a bit healthier, have started eating keto. Now, before you freak out and tell me horror stories about the person that you know who's liver and kidneys exploded and their eyeballs melted, and they gained 40 lbs instead of losing, just save it.  First, whatever...why you being a hater?  Why sabotage me?  Trust that I am an intelligent person, have done a bit of research, have talked to people and have decided to go into this with an open mind.  Trust that if I start feeling horrible, I will stop.  Trust that I am still using common sense.  And trust that if you are feeling bad about yourself and kind of want to knock someone else down, I totally get that.  I have been there.  I have done that.

But seriously, just cut that shit out.

Anyway, the other day, we were jonesing.  Geoff wanted chips, bad.  And something sweet.  He is a big time snacker, and is really not at all used to restricting what he eats (other than dairy, since he is lactose intolerant.  He gets to take pills for that though, that help him out and let him eat it, in moderation.)  I, a life long dieter, can do deprivation in my sleep. :)  I messaged our keto friends, Barb and Bill (who have been rocking this out for a while now.  Both of them have lost a bunch of weight and look amazing!) for help and advice on snacking.  They gave us some great ideas.  I also turned to Pinterest.

I found a couple of ideas there, and wanted to show you one that I implemented the other day (and again today, for my dinner/afternoon snack.)  They are basically mini pizzas, made on salami slices instead of bread.  You have to like salami, and as we have discovered, you have to use a sharper cheddar, or other equally strong cheese, to be able to compete with the strong salami taste.

Put your salami slices in a muffin tray, or flat on the baking sheet.  I prefer the muffin tin..it curves the meat a bit, so that it has some shape and holds the toppings better.  But flat is fine too.

Put your salami in an oven, heated to 350 degrees (I just guessed at this.  I don't know what a higher temperature might do, so feel free to experiment and see what happens!)

Cook the salami for about 5 minutes.  This will drain a bunch of the grease out of it, and hopefully crisp it up a bit.  If it isn't crispy enough, cook it a bit longer. 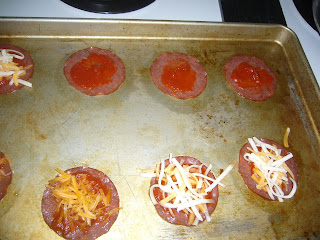 Take it out of the over and dress your pizza!  A little bit of sauce (I used left over spaghetti sauce, because a) it's all I had and b) I don't know that there is a difference between that and pizza sauce.   Add a pinch of your nice strong cheese, and add toppings.

Note: if your salami has drained a bunch of grease, you might want to clean some of that up first, or change your salami to another muffin tray/baking sheet first.  Cooking it longer in the grease really doesn't help the grease not be in your food.  :)

Put it back in the oven for about 5-7 minutes, or until your cheese is nice and melty and your edges are nice and crispy.  I haven't tried the broiler for this part, but it would probably work great! 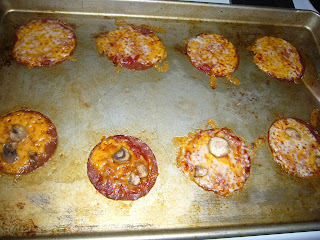 Take them out, let them cool a bit and enjoy!!  My carb count on these was very small.  The salami pieces I used had 0 carbs in them, the sauce had 8 g per 1/2 cup ( I used maybe 1 or 2 tbsp. for 8 slices) and the cheese has about 1 g per 1/4 cup (I maybe used this much for all of them).  You are using such small portions of everything, that the carbs really stay minimal. 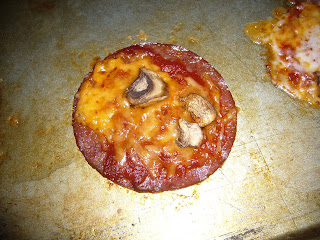 If this is your thing, give it a try. If you think of any great alterations or alternatives, be sure to let me know...I am sure we will hit a new snacking crisis in another week or so!