I watched a video today, that I just absolutely loved.  You need to watch this.

I can't watch this and not think about my little girl.   And myself.

I am a nerd.  I hope to God Sawyer grows up to be one.  Seriously.

I married a geek.  A full fledged, card carrying nerd.  We carry out our nerdiness, in completely separate ways.  Geoff is into comics, and superheros.  Video games, and role playing.  Much more traditional.

I have crossed over into his world occasionally.  I do read comics, things like the Neil Gaiman, Garth Ennis, Robert Kirkman.  I read and owned Killing Joke.  I saw all the Star Wars movies, the original 3, in the movie theatre with my dad and my brother. I remember being lined up around the block to see Return of the Jedi.  I am pretty sure I even saw Wrath of Khan at the drive in.

I played roleplaying games- D&D, ShadowRun, and Vampire and Werewolf.   Sure I brought beer and vodka to the table, and most times, I got drunk and was too distracted to finish the game, but I still played.

But my real geekiness comes in non-traditional ways.  I like horror- b-movie, cheesy, slasher horror.  I like romance novels.  I like 70's rock music.  I like knitting and cross-stitch and crafting.  I like my TV shows, like Supernatural, and even go to the conventions.  I love Harry Potter and Stephen King.

When I watch this video, I realize how much these passions in my life have shaped and continue to shape me.  And I think about how judged I have felt.  I remember what it feels like to explain something I do, something I love, to someone that thinks it is ridiculous.  I know what it feels like to have someone laugh, to make fun, to judge.  I am an adult now, and it still happens.  I went to a Supernatural convention this March, and when I explained that to people,  they joked and mocked.  Not all, but some. When I would explain to someone about the horror pictures that we took, I could see how they would disregard it, dismiss it out of hand.  I hated that, more than I hated the disgust.

But I also realize how much it doesn't matter.  How when you love something, when you embrace something with your whole heart and passion, the judgers don't matter.  Maybe you don't talk about it as much as you normally would, you don't bring it up in mixed company.   Maybe you drive the few people that you can talk to about it, absolutely bananas, because sometimes, when you have a few too many beers, that's all you talk about.

And you dream about it.  You think about ways to make it a part of your life in a permanent way.  You build it into your life, your family's life.

Tonight, while I was watching this video, Sawyer painted herself green.  She was fingerpainting, stripped to her underwear and painted her whole body green. She did it, because the colour was beautiful.  She did it because it felt good.  She did it, because she is 4, and she didn't think about the consequences.  She did it because she wanted to.  She was proud.  Her smile was huge and wide and shining like the sun. The mother in me thought I should be mad, but I couldn't be.  I was proud of her too. 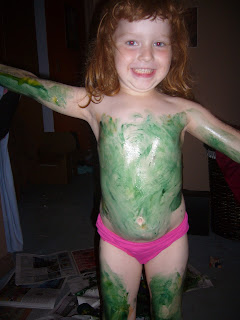 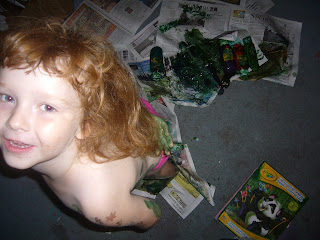 I want Sawyer to have this in her life.  I see these girls, directionless, passionless.  The driver in their life is pretty hair, and a new boyfriend.   I want Sawyer to wait for the next book from her favourite author to come out.  I want her to sit with her friends, and talk about Firefly, and whether Kaylee or Zoe is the bigger badass.  I want there to be a very real part of her that hopes and dreams that someday, someday, her letter from Hogwarts will come.  I want her to knit, or sew or rebuild car engines.  I want her to love something with all of her heart and soul.  I want her to want to be something, so that when she is 40, and married with kids, and stuck in a job, just for the paycheck- that she still dreams about what she is going to be when she grows up. 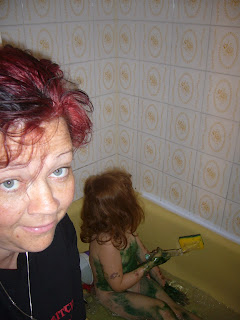