Today was the first day of school for Sawyer.  She is going into senior kindergarten, so she is one of the big kids.  The day she finished in June, she realized that she had now moved up the ranks and was very clear in the fact that her status as an SK was one that she had earned and was going to wear proudly. 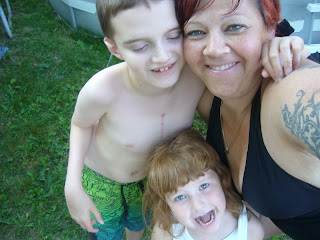 The last couple of weeks have been busy ones.  We have been trying to cram as much fun and good times into the end of summer as we could.  We had trips to the zoo, the park and Great Wolf Lodge.  We had fires, and BBQ and even some rain days. 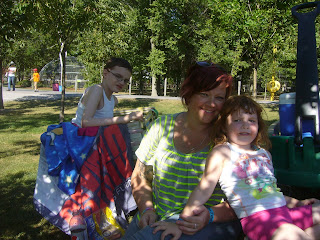 Through it all, me and the kids were together through the days, the nights, all of it.  Yes, there were the occasional sleepovers at Grammie and Papa's and Grandma's.  But for the most part, it was the 3 of us.  Lots of it was super fun.  Some of it was not quite as fun.  Some days were down right rough.  But through it all, there was the light at the end of tunnel - September 3, the first day of school. 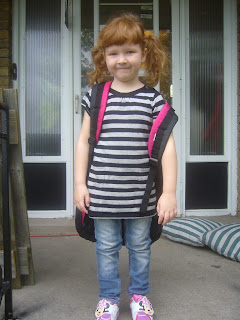 After a fun filled last weekend (well, Monday was low key- by that time, Momma Bear was tired and achy and needed some serious couch time), today was the day.  Last night, we packed lunches, we laid out new clothes, we had baths and washed hair, cut fingernails and toenails.  We read stories and at separate times I talked to each of them about the fact that I was in fact going to miss them but that they didn't have to worry about me.  I told them each that I would be working, and I promised that I would be there to pick them up, and spend the evening with them.  I assured them that it was perfectly ok for them to have a good time at school, and that I loved them more than anything else in the world.  That seemed to be enough to settle my anxious little souls and everyone (except me) slept soundly and well. 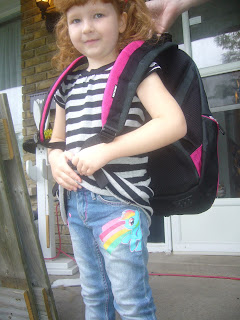 This morning, we got up nice and early, had waffles for breakfast, and even had a dance party to Katy Perry.  It was a great morning and everyone was starting off on a high note.  Sawyer made it to the bus on time, had time to play with her friend Sarah.  The bus was very late, so we had a bit of a rush getting back in time to load Sebastian into the van and off to school. There was a momentary setback to the day when we were advised that in fact, Sebastian didn't start school today, but instead next Monday.  He was thrilled, I was less so. 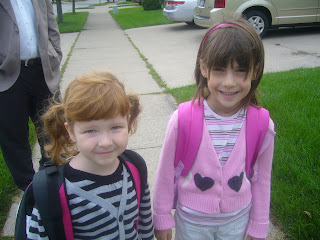 Sebastian and I spent the day together, chilling and working.  We ate lunch from his lunch bag (well, he did, I had scrambled eggs and cheese).  When it was time, I made my way to the bus stop and waited.  And waited.  Aaaand waited.  When we were reaching the 30 minute mark, I was starting to get worried.  Luckily, I had good friends to text back and forth with, to help take my mind off of the fact that my kid was currently missing and riding around randomly on a bus somewhere.  Finally, she made it home, and we were all together again at last. 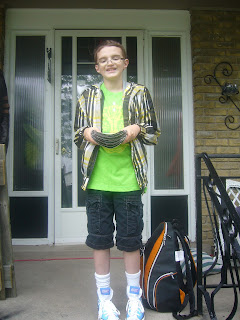 So, today, as with most first days, was a very emotional day for me.  Did I cry?  Of course I did.  When I was alone and things were quiet for the first time in 2 months, I smiled and cried a little.  I made her bed, and put away a toy or two and I missed her with my whole heart.  I could smell her shampoo when I went into the bathroom, I could hear her feet skipping across the floor in the kitchen.  I had a space in my home when she was gone.
Of course I cried.

I will do it all again tomorrow. And the day after.  And the week after and the month after.  All over again.

Last weekend, I was having this amazing conversation with someone. And I was trying to explain the magic and the romance in my life, that is being a mother.  It is so hard to explain, because when you say it, plainly and basically, in real words, it sounds insane.  How, last week, as I sat on my stained carpet in my bedroom, where I had to literally shove toys aside to find a clear spot, I could see the beauty in my surroundings.  I folded basket after basket of laundry, as I looked at the clutter- my towering pile of yarn, waiting for projects to be started and finished, the stacks and stacks of kids' movies, scratched and worn, but ready to be played at a moment's notice, the cut up paper bits from the last art project, the dollies and the horses, the books and the stickers.  All of it is the jumble of the poetry that is my life with kids.  There is an inherent magic and beauty in it.  I don't always see it.  I don't always appreciate it.  That day I did.  That day, I could embrace the fact that it was noon, and I was still in my pyjamas and so were they.  I could love that I had syrup on my cheek, when I hadn't had pancakes for breakfast.  I could watch the sun come through the window and watch the wind move the curtains, and understand that I was living a fricking miracle.

Like I said- it sounds insane.  Until you are there.  In that moment.  In the mess and the heat, and the love.  And then it's magic. 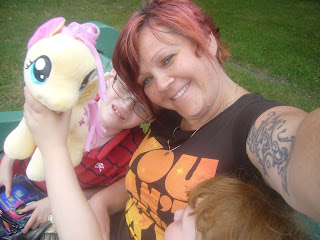 I lost that magic for a little while today.  I will keep losing it, little by little, every day, every week, every year.