January 2nd was the one year anniversary of my furry baby, Axle, joining our family.  I love this frigging dog so much.  And he loves me.

He is exactly the kind of dog I always wanted growing up, but never really had.  He adores me.  He follows me around and sleeps on the bed with me.  He listens when I tell him things.  He is well trained, even if he has goofy moments when he decides not to listen.  He will play fetch for hours (literally), but when I want a cuddle, he will climb right up in my lap. 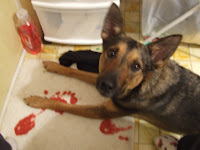 He has the most beautiful brown eyes.  He smiles when I talk to him.
He is infinitely patient with my kids.  Sawyer feeds him one piece of food at a time, and he just sits and waits for her to finish.  She floats boats in his water dish.  He just drinks around it.  She hugs him, and wants to dress him up.  He lets her....within reason.  Sebastian wants to pet him, sometimes.  Axle will let him, whenever that might be. 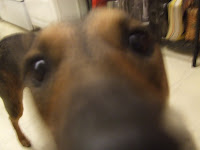 The day I brough him home, I made a promise to him.  As we pulled away from the house he was living in, I swore to him that he could stay with us forever.  He ain't going anywhere.
Somebody once told me that they believed rescue animals remember the rescue.  This girl had rescued a cat, and the cat was her baby.  I think that's true.  I think Axle remembers what it was like, and he remembers that I was the one that brough him out, brought him home, and loved him.  That's why he loves me back, so much.
He and the cat are friends. Now.  It took about 10 months for Morph to actually come around.  But Axle fights his natural urge to chase him, and lets the cat do whatever he wants.  They actually sleep together now.  It is the freaking cutest thing ever.  It makes me so happy.

When I brought him home, he was threadbare, and worn down.  He was only 2, but we were his 5th owners.  He had no winter coat, because he never went outside.  You could count his ribs.  He slept in a cage, on a blanket that reeked of cat piss.  There was no leash, I walked him with a jump rope, the first time I saw him (the day before I actually brought him home).  His toys were tupperware lids.
He has come so far.  I am so glad I have him in my life.  I needed him, as much as he needed me.  He made our little family complete. 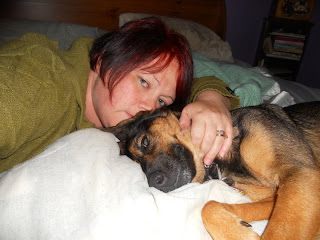 Rosie N. Grey
The N stands for natural, just like me and him.
Posted by Rosie N. Grey at 10:53 PM