A week or so ago, Geoff and I went to see John Schnieder and Tom Wopat at the Fallsview Casino.  My mom and dad got the tickets for Geoff for Christmas.  I knew they would either be a big hit, or a colossal fail.  As it turned out, it was a great night, not just for Geoff, but for me too.
My mom and dad had offered babysitting services overnight with the tickets, so that in and of itself was a good deal.  We started with dinner at Jack Astor's, since we had gift cards left over from our anniversary, from Geoff's parents.  Yeah presents!!  I had the ever yummy buffalo chicken fingers, a huge favorite of mine.  We saw Christa and Craig there, great people that I really miss seeing often.  We seem to run into them fairly often though, so we chatted for a bit, before Geoff and I had to leave.
We headed to the casino and parked.  It was Friday, so it was packed, of course.  The show started at 9pm, and we got to our seats with about 10 minutes to spare.
Our seats were awesome!  Three rows back, and dead centre.  Geoff had a crazy uber fan beside him, who brought her photo albums with her, full of pictures of her and John and Tom.  She also knew how John's mom was and kept waving at her.  I don't think she was actually a family friend. I think "stalker" would be more accurate.

The show started right on time.  They had a horn section from Toronto, a piano player and a guy that played the stand up bass and guitar, I think.  The horns started up.  Geoff turned to me and with a huge grin said that he felt like he was 10 years old.  He was so excited, it was a great thing to see.  Tom and John came out and started singing the theme song from the show.  That was pretty great.  I was worried that they were going to try and be "artists" and maybe ignore the show and all the history there.  But they didn't.  They totally embraced it, and mocked it and were awesome. 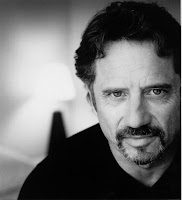 The show itself was good.  They sang a lot of country, which was fine, and showtunes, most of which I didn't really know.  They sang a funny duet to "Baby, it's cold outside", and changed all the words.  It was very funny.  Tom sang a song a capella, without the microphone.  He projects very well- both his words and his saliva.  He is a spitter.  Geoff is convinced that it is because he is on Broadway and has to project and strain all the time.  All I know is that I really felt bad for the people in the front row.

They interacted alot, with John making fun of Tom's age, and Tom, trying to be serious, but having fun too.  I have always been a Luke Duke fan.  He was cooler, he shot the bow and arrow.  But watching John Schnieder and his antics and his interaction with the audience, I started getting a major crush.  They have both aged- it's been 30 years since the show was on.  But when John smiled, you could see the young John in there.  He was super cute!  And when he lost it during one of the songs, with the giggles, to the point that he couldn't sing- I could totally relate.  He won me over completely.
Just a note- Our seats were great.  GREAT.  But I felt alot of pressure being in the front couple of rows.  I felt like I had to make eye contact, and look receptive.  The theatre was a bit cool, and I had my arms crossed, and I literally worried that my body language might offend them.  Geoff agreed, and said he was worried that he might be looking at one of them longer than the other, and didn't want to offend them.  LOL...it was an unexpected side effect of being that close to the stage.

They sang a song by Waylon Jennings (I can't remember which one now)- which I loved. They sang a 3 part harmony, old time country song- a style that I am a total sucker for.  It give me goose bumps.  They sang a bunch more, including a request shouted out from the audience.  They were talking, and this guy just yells "Who cares!!"  Right away, I got super offended, on their behalf.  As it turns out, however, it is a song that John wrote and released years ago, and it is the audience member's wedding song.  John sang the first couple of verses, which is all he could remember, just for this guy.  I thought was pretty cool.

They closed the show with another rendition of the "Dukes of Hazzard" theme song.  Awesome.  We all filtered out into the lobby.  There was a huge crowd, right in front of the bathrooms.  Geoff and I tried to make our way around, so that I could use the facilities, but realized there were tables set up, so we figured the boys were coming out to sign autographs.  I really had to pee, but Geoff had a funny look on his face.  I knew Geoff really, really wanted to stay, and at least see them, so I handed him my camera, and went to use the one near the entrance.  After I made my way back, I realized that they had capped the line and shut down the lobby.  They weren't letting anyone back in.  I texted Geoff and told him, and also told him to sit tight and get his autograph.  I had pulled money earlier, for just such an occasion, so Geoff was well prepared.  When he made his way out of the lobby, autographed picture and ticket in hand- he was like a giddy school boy.  Geoff has said since that those autographs are the holy grail of his autograph collection.  He can't think of anything or anybodies that he would want more.  I am so glad for him. :)


﻿
Oh, I forgot to mention that John's stock when down a bit when he came out from behind the microphone and I saw that he had Ugg boots on.  They are not for men.  I think they look dumb on men.  But, he was still sweet and charming, so he stayed in my good books.
Good night.  :)


Rosie N. Grey
The N stands for "Night of the Dukes". 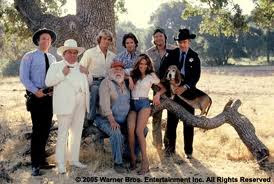