Meal time is always an adventure here.  Sebastian won't eat veggies, anything smooth or creamy, anything with sauce, anything too hot, etc, etc.  Sawyer won't eat meat, needs to have ketchup for pretty much everything (including dessert) and will at time arbitrarily decide to not eat anything at all.

Tonight, Geoff made a really nice dinner- ham, mashed potatoes, raw veggies with dip.  Sebastian ate the ham.  Sawyer however, was not happy with the food selection.  She had set the table- with paper plates, soup spoons and an ice cream scoop.  She decided that she wanted ice cream for dinner.  Nothing else would do.

I had a stroke of genius.  I took the ice cream scoop, and scooped up some mashed potatoes.  I put it on her plate, all rounded and nice.  I told her it was white (aka vanilla) ice cream.


Geoff laughed convinced this wouldn't work, and for a while it was touch and go.  She was angry that we didn't have black (aka chocolate) ice cream.  She cried at that, but didn't blink when I suggested that she put butter on her ice cream. 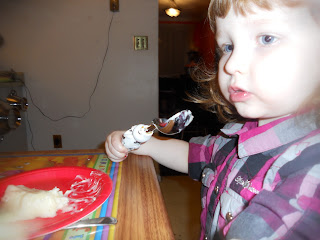 Finally, after some whining and carrying on, she decided to sample her food.  Using the ice cream scoop, she started by licking the butter only, then gradually moving on to the potatoes. 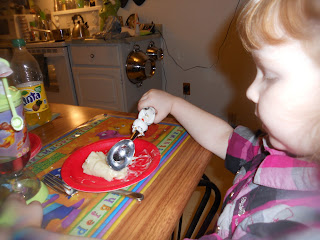 Her final verdict?  "This isn't bad.  Dinner isn't yucky!"  All with the amazement and enthusiasum of a 3-year old.