Sleepin' on the cheap

Wow, it's been a while since I blogged.  Before we went away on vacation last week, G and I took the kidlets out on the town, to a hotel and a waterpark.
﻿ ﻿ For those that don't know, every year, a bunch of the hotels in Niagara Falls offer a bunch of rooms super cheap.  The money goes to local charities, and all the local people get to have fun and stay at hotels that we wouldn't normally stay at or know about.  Geoff and I always try to pick one that has a water park.  This year, we got the Skyline Inn and the Fallsview Waterpark.
﻿
﻿

So, we headed down to Clifton Hill.  We checked into our hotel, which was pretty cool.  They have courtyards set up, with an open area, and 2 levels of rooms facing in on it.  We dropped off our stuff, and headed out.  We went to Botson Pizza for dinner.  Sebastian was super stoked because from our seat, he could look across the street and see the Count (the vampire on the Count Dracula Haunted House sign).  We ate a really cool meal, lots of yumminess.
After dinner, Sawyer and I had decided to go on the big Ferris wheel.  Sebastian wasn't interested at all, and Geoff is funny with heights.  So, the girl and I decided to take it on.  She liked it, but got bored quickly.  It was really, really high, so I got a little tingly in the tummy a couple of times, but it was ok and fun.﻿﻿﻿﻿
<><> 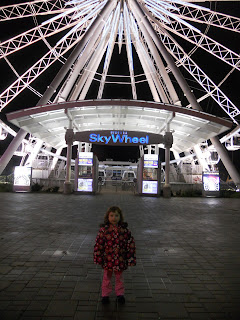 ﻿﻿﻿﻿﻿After the Ferris Wheel, we went into the arcade and played a bunch of games.  The kids ran around like crazy and had some fun.  When it came to prizes, Sebastian picked out a cool stuffed animal.   Sawyer decided that all she wanted was 2 purple shoes- that is purple croc keychains.  She got them, and was thrilled. ﻿﻿﻿ ﻿ 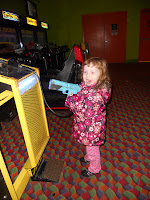 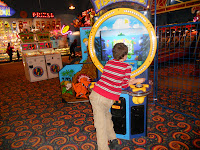 After that, we went to the hotel.  They had a cool event, where they would show movies in the courtyard.   That night, they were showing Cloudy with a Chance of Meatballs.  Kids would go in their pj's, with their pillows and blankies.  Sebastian and Sawyer went right up front, and snuggled in.  It was very fun and very cool.
After that, we headed back to the room and bed.  Bastian crashed early, Sawyer took a bit longer, and I followed right along behind.
﻿﻿﻿﻿﻿﻿﻿﻿

The next morning, we met my mom and dad at the Perkins restaurant for breakfast.  It was lovely and delicous.  Then we headed to the waterpark.
﻿﻿ ﻿﻿﻿﻿ ﻿ ﻿ ﻿

Both the kids had a blast.  I picked fights with an 8 year old and a 10 year old.  I'm not even sorry, because I thought they were picking on Sebastian.  The little girl (8 year old) looked like she was going to cry.  The 10 year old boy was just a dick.  I am still not sorry.
﻿﻿﻿﻿

﻿﻿﻿﻿ Anyway, Sebastian gets tired pretty easy, so we took quite a few breaks.  Poor Geoff got stuck with the crazy Sawyer, as she ran all over and played and played and played.  But it was a fun day, and I am glad we went.
Already looking forward to next year :)
Rosie N. Grey
﻿﻿