It's the weirdest thing.

There are some cartoons that trigger emotions in me, and memories, so strongly that I am either fiercely drawn towards or repelled from those shows.  I don't know why this is coming to me now, but it is.  So there.

Dragon Tales is one of them.  I hate it.  I can't even hear the theme song.  It makes my stomach hurt, and my eyes burn.  Literally.  No joke. It reminds me of when Sebastian was very, very little.  We were living in our first house.  I had gone back to work early, when he was 4 months old.  My mom and dad had him a lot, because I was working.  Geoff's job was difficult and paid poorly, so he had finally found something at Accenture.  But because he was new there, he was nights.  For months, he worked 4 to midnight.  So, I would get up early with Sebastian, because Geoff had been up until 3 or 4 in the morning, get him dressed and fed.  On good days, Geoff would get up and take care of Sebastian during the day, until he went to work at 3.  On bad days, Sebastian went to my mom and dad's for the day, until I came home at 5 or 6.  I would get Sebastian, and he and I would head home.  Dinner together, baths, some playtime, and then bed for him.  I would try and clean up, as quietly as I could, so as not to wake him.  I would do as much as I could, until I got too tired, and then it was bedtime for me.  Geoff wandered in some time after midnight, and then the next day it started all over again.
I felt like a single parent.  Money was very, very tight, and I would see Geoff maybe one full day a week.  It wasn't a very nice time in my life.
In the mornings, when I didn't work, Sebastian and I would lay together on the couch, him with his bottle, me with my tea, and watch cartoons.  Dragon Tales was one of them.  He loved it then, and he still loves it today.  But the association for me with this sad and lonely time is so great, I simply can't stomach having it on in my house.
The other that has a big association for me is Backyardigans.  Both Sebastian and Sawyer loved Backyardigans,  but seem to be growing away from them.  That makes me sad, because I love them.  :)  Truly I do, and truth be told, I will sometimes sit and watch them myself, when no one else is home.  I love the songs, the dancing and the imagination in each show.  But again, it has an association for me that is responsible for much of my good feelings.
When Sebastian was 4 and a half, it was determined that he needed to have ear tubes.  He had had multiple ear infections (surprisingly, we rarely knew that he had had them) and was born with very narrow ear canals.  All of this led to a severe buildup of fluid, wax, blood and other awfulness in his ears.  The DR wanted to do the surgery, put in the tubes, clean out the junk, and also do his tonsils and adenoids at the same time. 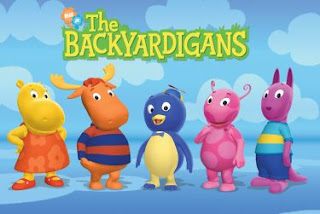 Now, keep in mind, 4 and a half year old Sebastian was a very different little boy.  Sebastian was still essentially non-verbal.  He had a vocabulary of maybe 10 words and maybe a dozen different signs (some real, some he invented).  He was withdrawn, unengaged, and removed from the world around him.  While he could be very affectionate and friendly, he also had the most minimal understanding of the things that happened to him, and had no way to communicate his frustrations to the world.
And somehow, I was supposed to put this little thing through a surgery and recovery.  Sheesh.

The DR gave me all the instructions, but truly figured that Sebastian would be re-admitted to the hospital within 72 hours.  He figured there was no way that Bastian would eat or drink in the way that he needed to, and that he would end up on an IV, until he was healed enough to be on his own again.

Well, the surgery went fine (I have posted enough on here about Sebastian and surgery.  Just know, this was the first, so my learning curve was steep.  It also prepared me for everything that came after, if that is any indication.)  I took the little monkey home, hellbent on making sure he wasn't going back to the hospital.  Geoff worked that day and had a work function that night, so it was me and Bastian, united.
I'm not saying it was easy, but compared to what I was expecting...it was a cakewalk.  The kiddo came through with flying colours.  He did so great, he was eating right on schedule, his throat healed wonderfully and he shocked the doctor with how well he did.

While he was recuperating, we would lay in my bed together, watching DVD after DVD of Backyardigans.  I am sure there were others, but it's Uniqua, Tasha, Austin, Pablo and Tyrone that stick out in my memory.  And when he was recovering, and I would have to put the drops in his ears, we would have to keep them in for a certain length of time.  I found that singing the Backyardigan's theme song was the perfect amount of time, and one that was guaranteed to make him smile and laugh, when his first inclination was to cry and fight me.  That silly little song turned what could have been a battle, into a little mom and son bonding.  I think of those times, every time I hear the song.  Every time.

As a post script to that story, it was his ear surgery that, I believe, began to turn our lives around.  Within a month after Sebastian's surgery, his speech exploded.  He could finally hear, and was learning how to communicate with us.

Cartoons.  Love 'em or hate 'em, they are really a part of my life.  Wouldn't have it any other way.

Rosie N. Grey
The N stands for "Nickelodeon sets the soundtrack of my life".
Posted by Rosie N. Grey at 9:58 PM