So, I am posting this without permission from my husband.  I don't *think* he will mind, but you never know.  I just don't feel like waiting and he isn't here right now, so I am going ahead and doing it! :)

I think I have posted before about Geoff and his dream of opening a comic shop.  Well, friends and neighbours, hold onto your hats!  'Cause Sketchbook Comics and Games is a-comin'!! 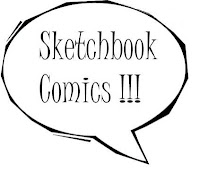 Geoff and his business partner, Joel have secured a lease on the building, got the financing in order and are ready to finally move ahead with what is, quite literally, years worth of work.

Geoff and Joel started talking about opening a comic shop years ago. They had tossed around the idea of having a virtual shop, but really never took it much farther than picking a name (Sketchbook Comics) and creating a fan page on Facebook (check them out here).  Both of them were working full time at that point, and it was more pie-in-the-sky, maybe-someday kind of thoughts.  On bad days at work, it became more real.  But when the work was ok and the money was flowing in, it stayed right there on the dream shelf.

Through a series of unfortunate events, some out of his control, some within, Geoff lost his good paying job.  Good bye security.  Good bye benefits and pension and bi-weekly pay cheque.  I was on maternity leave for our daughter at that point.  The day he came home and told me it was coming (as of the end of the week) I emailed my supervisor and told her I was coming back early.  Did I mention we both worked at the same place, for the same client?  So, essentially it was my boss that let him go?  Yeah, fun times.  So, basically his last day was Friday, and I walked back in the office on Monday.

In that time frame, a couple of other things happened.  One, Sebastian was diagnosed, officially, with Autism.  That led to much research and activity on my part.  We started with the naturopath, started eating casein free and gluten free.  We started looking at therapies and other avenues for him.  It was a stressful time, but I was learning lots and was very, very busy.

I also had my initial ideas for Cracked Lens Photography, our horror photography business.  Geoff used the time off work to go back to school casually and start to learn how to take pictures, which was a long time interest of his.  It was an added expense, but I felt it would be worth it in the end and this was a possible solution to Geoff's new unemployment situation.

By September, we had a whole new set of problems.  My client at work was leaving.  This meant my job was eliminated.  Panic started to set in.  I was applying for jobs, trying to find something within the company that would work for me.  The only things they were interview for were managers of people.  There were 9 of us, interviewing for 3 jobs.  Can you spell STRESS!!

I still remember the day I was told I didn't get the job.  As I was told, it wasn't that I wasn't qualified, I was over qualified.  I was told that I wouldn't like the job, that I would find it boring and unsuited to me.  I remember sitting in the room, very aware of my face.  I was keeping my eyes wide so I looked interested in what was being said, and to keep myself from welling up.  I kept my hands and fingers loose in my lap, because I knew if I clenched them, someone would read that sign.  I kept my mouth with a slight upturn at the corners, like a mini smile.  I tried not to clench my jaw.  I made constant eye contact.

The whole time, all I can think is- how dare you?  How dare you tell me I won't like this job?  I KNEW I didn't want the job.  I knew I wouldn't like it.  But I also had 2 kids and a husband at home.  I have a mortgage and bills.  I have doctors to pay, meds to buy.  And if I decide that I want to do a job that is boring and frustrating, then by God you had better give me the opportunity to do it.  YOU have no right to decide that for me.
And while I thought that, I tried to let nothing show in my face, except friendly interest.

Shortly after that conversation, a new position came up.  My old boss told me she told them (whoever "they" are) that I had to get it.  That it wasn't fair to let both me and my husband go.  So they did.  That's the job I have today.  That was in September of 2009.

Fast forward a couple of months, into the new year.  Geoff's severance and then  his EI run out.  He was still taking photography courses, still talking about the shop, but nothing is moving quickly.  In November of 2010, Geoff took a job at a call centre.  Nothing great, but it was money coming in.  I am still plugging away, doing what I do.

Then April 2011 comes.  Geoff's dad dies.  Everyone's world turned upside down.  Geoff admits now that this was really the catalyst in getting the comic shop going.  He looked at his dad, who was still young and vibrant, and realized that no one has guaranteed time.  No one knows what's coming.  And he decided that he wanted to do something different with his life.  He wanted to work for himself, doing something he loves.  He wanted to open his comic shop.

2011 was a sad year, and things moved slowly.  Geoff, while feeling a lot of the above sentiments in the back of his mind and heart, didn't express much of it.  It came out in different ways.  His interest in work waned.  He was there as little as possible.  And in August 2011, he quit.  He asked me what I thought, I told him it was a job and not a career and to do what he needed to do.  He was feeling the physical effects of the stress and there were other health concerns.  So, he walked away.

I kept on, keeping on.

Geoff and Joel started talking in earnest at this point about the shop.  They worked on a business plan, finances and looking for space in Niagara Falls.  Unfortunately, they kept hitting barriers.  Either the space would get rented out from under them, the finances wouldn't be quite right, or a million other things would come up.  Over Christmas, they decided to take a break and step back for a bit.  I think they were both thinking that if it was this difficult, maybe it wasn't going to happen.  Maybe it wasn't meant to be.

The break lasted months and into 2012.  I continued to work, grabbing as much overtime as I possible could, to keep us afloat until we knew what was happening.  The plan the whole time was that Geoff, without a current job, would be the full time employee of the store and Joel would help on evening and weekends and keep his current job (Joel and I work at the same place, too.)  But until that happened, there was me, and that was it.

Finally, in April of 2012, the boys reconvened and got to work.  The plan had changed slightly.  They were now going to put the store in St. Catharines, which is larger than NF, and has only one comic store, to the 3 in Niagara.  They found a great space.  They figured out a way to get the financing and make it work.  So, for months, they have been working away, chipping away at the roadblocks.  And now, it looks like we are good to go.

So, in the very near future, come and check them out.  They promise you a good experience.  They are fans, first and foremost.  They know what's good- for you, for kids, for women, for anyone.  They can talk to you about DC, Marvel, Top Cow, Image and a million others.  It will be clean and organized and easy to navigate.

It will be a labour of love and it will be amazing!  Congrats guys!!