So, Sawyer fulfilled one of her missions as a little girl today.  She cut her own hair. 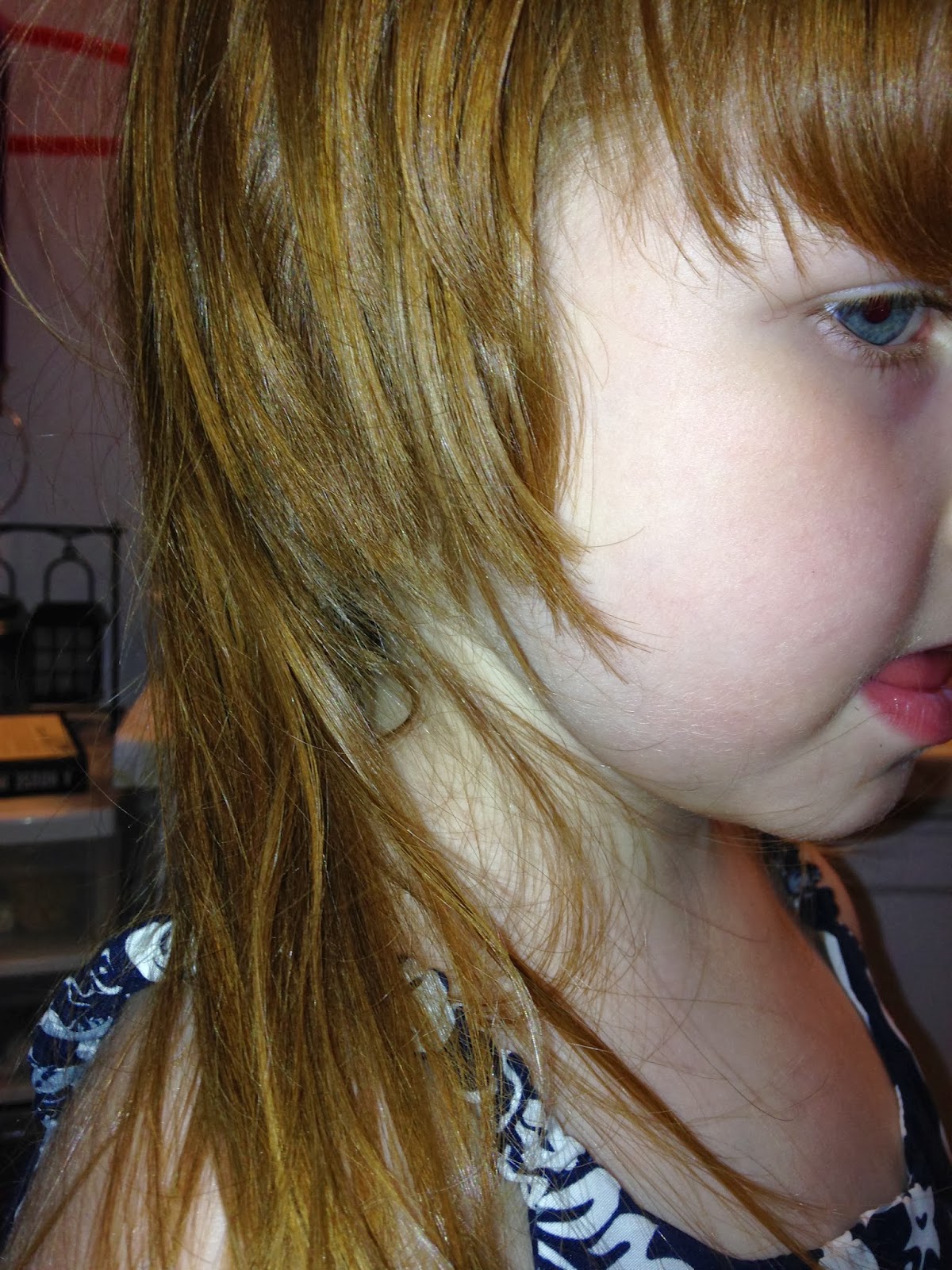 As most people have said that have heard the story, we are lucky that this is the first time she has done it.   She is 5, and really, other than some colouring on the walls and in one library book, she has been pretty good.  So, I guess we were due. 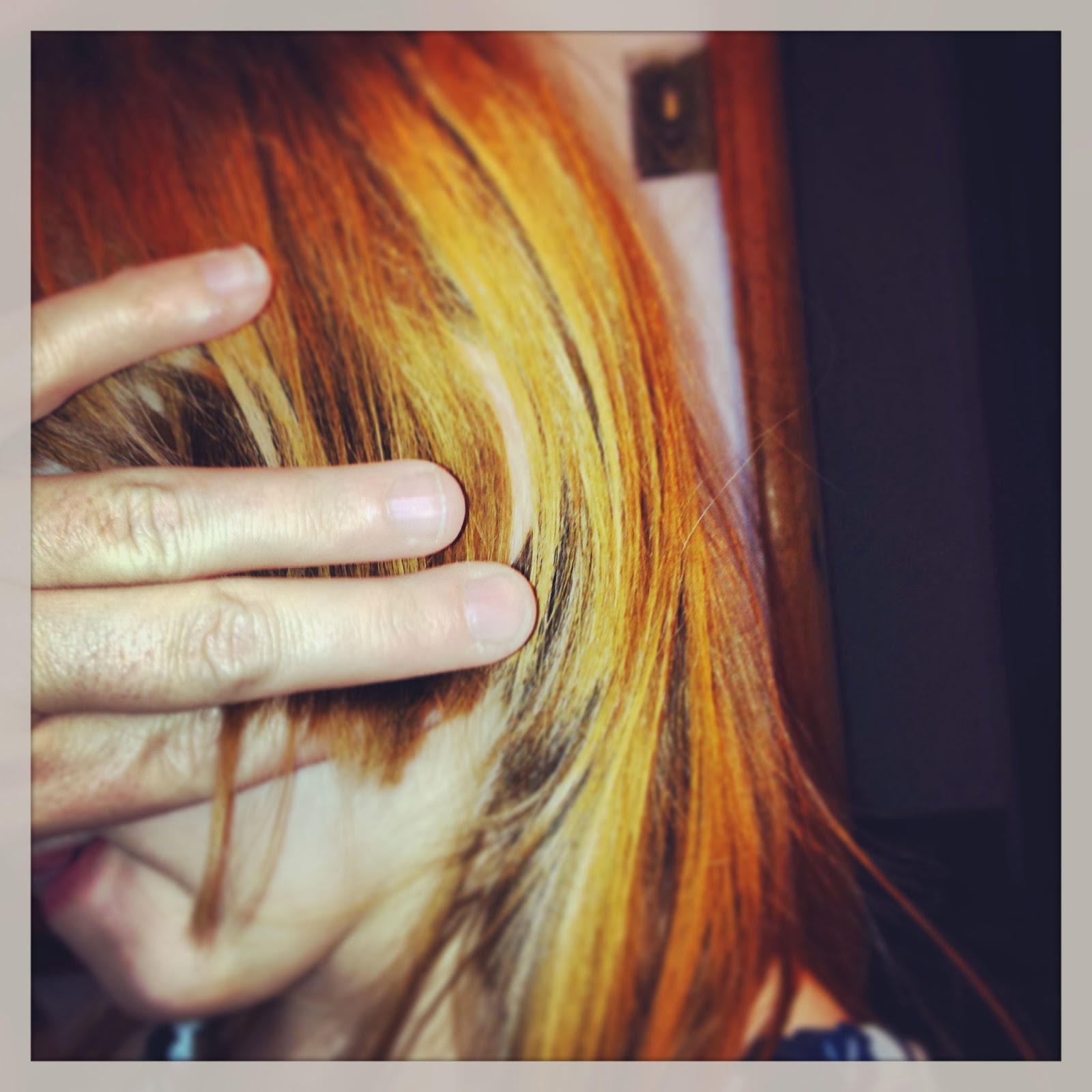 She went to spend the first part of the afternoon with Geoff at his store.  I got a FaceTime call after about an hour.  Geoff wanted to show me what Sawyer had been up to.  Immediately I had an idea that this wasn't going to be good, and honestly, the first thing that popped in my head was her hair.  I had straightened it that morning (something that I don't do very often) and she had been paying extra attention to it.


As Geoff tried to get Sawyer to stand up in front of the iPad and she kept hiding behind him, I knew it wasn't something good. Geoff kept telling her that she wasn't in trouble and that no one was mad.  I really wasn't comfortable with him making that commitment, since I still didn't know what she had done.

Finally, I just put it out there.  I wasn't angry, just irritated.  We had been growing her hair out for 2 years.  I was the one that brushed out the knots, that braided her hair, that washed it, and conditioned it, that ties it back, puts it up.  And now, she had a vicious mullet.

I didn't yell, I didn't get angry.  I went and picked her up, took her home and cut off the rest of her hair.  It's in the garbage in the bathroom, her beautiful red hair.  It was smooth and soft and lovely.

She is still beautiful, and her little pixie cut suits her.  I know it is a rite of passage for every little girl in the world.  All of them cut their hair at some point.  I'm not even irritated or upset anymore.  I can laugh about it now.

I know for her, there will more, bigger, better and way, waaay worse rites of passage.  Breaking curfew.  Lying to my face, about something more important that gluing a sock to the closet door (yes, she did that today too).  Drinking.  Smoking.  Dating.  Sex.  Maybe worse things (fingers crossed that doesn't happen.)

In the long run, short hair doesn't matter.  She is a goof.  She's cute and goofy and adorable.  And she is gonna keep doing stuff like this.  Me, as her mom- my job is to get on board, and handle this.  Clean up the mess, and move on to the next mini crisis.

Sebastian is experiencing his own rite of passage.

Thursday night, I dropped him off for his new Social Skills group.  It is offered through Bethesda, and he has done this program successfully before.  Typically, it is a smallish group, maybe 5-7 kids, all around the same age and skill levels.  They go shopping each week for food, help prep the dinner, eat it and clean up afterwards.  Each week, they have a different topic, and work through exercises that encourage appropriate social interaction.  He has always enjoyed them in the past and we have gotten good feedback.

Bethesda works with a pretty much constant waiting list, so they do the only fair thing that they can. Once you complete one session, you decide what program you want to participate in, and then you go to the back of the line.  That way, everyone gets a chance.  Sebastian averages about every 18 months in a program.
We got a call in the middle of December, offering us a spot for Bastian for the January/February session.  I jumped on it of course.  I had a few misgivings along the way, with little things that were mentioned.  The Bethesda worker mentioned that the age of the group was 11-13.  On the surface, this is fine, Sebastian is 12, so all good, right?  Well, that would be true, if his interests and actions were those of a typical 12 year old.  I hate to use the word, but he is very immature for his age.  He is coming around slowly, but he still is very interested in cartoons and characters that are aimed at kids much younger than he is.  I couldn't care less, but it does set him apart from other kids his age. 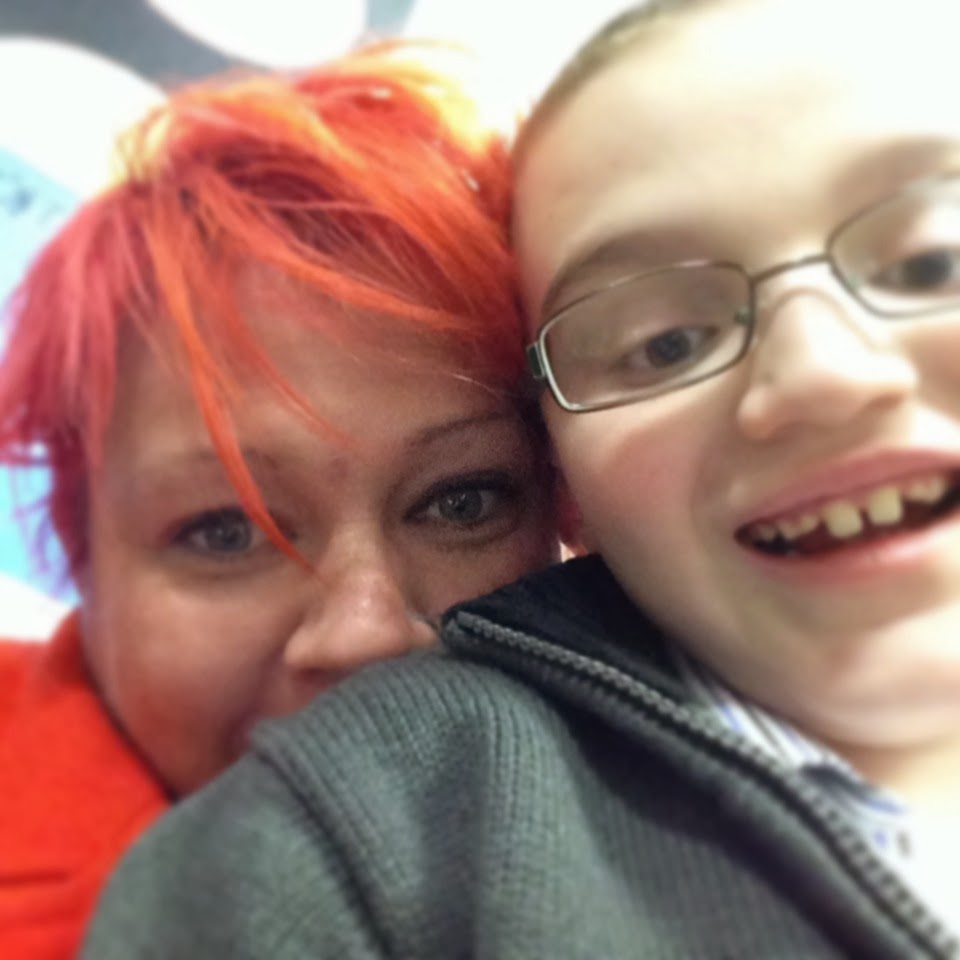 In a follow up conversation, she mentioned that this group was for high functioning autistics.  Again, I paused.  Sebastian, while doing very well and making great strides, really isn't what I would consider high functioning.  He has issues with learned dependence, and has motivational issues.  He needs assistance with some basics and can be difficult to understand.  High functioning is a grey area, a term that can encompass a great deal of different activities and skill levels.  Because of this, I didn't heed those quiet little alarm bells going off in my head.

So,  Thursday.  Our first night.  Sawyer, Sebastian and I head out to the school where they are hosting the evening.  We are a bit early, and I know from experience that they don't open the door until the exact time.  We sat in the car, chilled out, listened to some Pink on the radio and talked about what was coming.

Sebastian was pretty grumpy with me.  I had started prepping him for the group a couple of days before, but he was still unhappy about the fact that I had pulled him away from his TV. He wanted to stay home, chill out in his pjs, and watch TV.  Like he does every night.   And now, I had thrown something new in the mix.  Instant grump.

Finally, it is time to go in.  I am scanning the parking lot for the inevitable Autism Support puzzle ribbon on the back of a car, to show me how else might be heading in.  I see one mom and her son walking up.  The son is in neon green kicks, and has his hoodie pulled up.  He is radiating teenage angst from every pore.

That niggling doubt in my head has now spread to my stomach.

I pull the kids out of the car, and we head up.  Sebastian skips and hums his way to the door.  Sawyer flits around, alternating between yelling and extreme shyness.  We make our way in and sit to wait.

There are 2 other girls there, waiting.  Their moms are not with them.  The one girl is as tall as me.  She is plugged into her iPhone and is texting away.  The other has her boots on, her mini skirt and is busy reading every plaque in the lobby.
My instincts are screaming at me now.  Get out of here.  But I am committed.  There is a waiting list.  We took this spot, we have to see it through.

The girl comes out to collect the kids.  I give them my money and my cell phone number.  Sawyer and I kiss Bastian good bye and leave.

I have done this hundreds of times before.  It's always been fine.  This time it wasn't.

I wasn't worried about his physical well being.  I knew there was appropriate supervision.  Things were going to be fine. But, it just wasn't right.  They were way more advanced then him.  They were bigger, older and on a completely different level.  My strange little boy was not going to fit in, not even a little bit.

I had my mini melt down in the car.  When it was over, Sawyer and I went to visit Geoff's store.  Even Geoff picked up that I was worried, and consoled me.  We went home, Sawyer and I had a nice dinner together and I kept busy until it was time to get him.

When I picked him up, the therapist admitted tht while he had had a good night, he was on the lower end of the scale for the group.  She advised that there is a group on Tuesdays that might be better suited to him.  She was going to talk to her supervisor and see if they can get him shifted to that group.  If not, he is committed to Thursdays, and he should keep going.

I thought about it all night.  I decided that if he isn't going to Tuesdays, I am going to pull him from the Thursday group.

I know some people might question that.  I questioned it myself.  Should I leave him, and let him get exposed to some higher functioning kids?  Would it be good for him?  How much would he benefit from continuing in this group?  Am I sheltering and babying him too much by taking him out?

But then I think about what the basis of most of the social therapy is for kids with autism.  The mentality of putting an ASD kid in a normal class, and hoping that the skills that NTs have will be picked up and learned by the autistic kid is ridiculous.  These kids don't pick up social cues.  They don't learn the way the rest of us do, by observing and mimicking.  So, for me to hope that exposure to older kids will teach Sebastian to act more age appropriate is completely unjustified.  He just doesn't learn that way.

He is quiet.  He will end up in a corner, looking at his pictures, isolated in his little world, since he can't relate to the one around him.  Pushing him into this situation will not improve his. 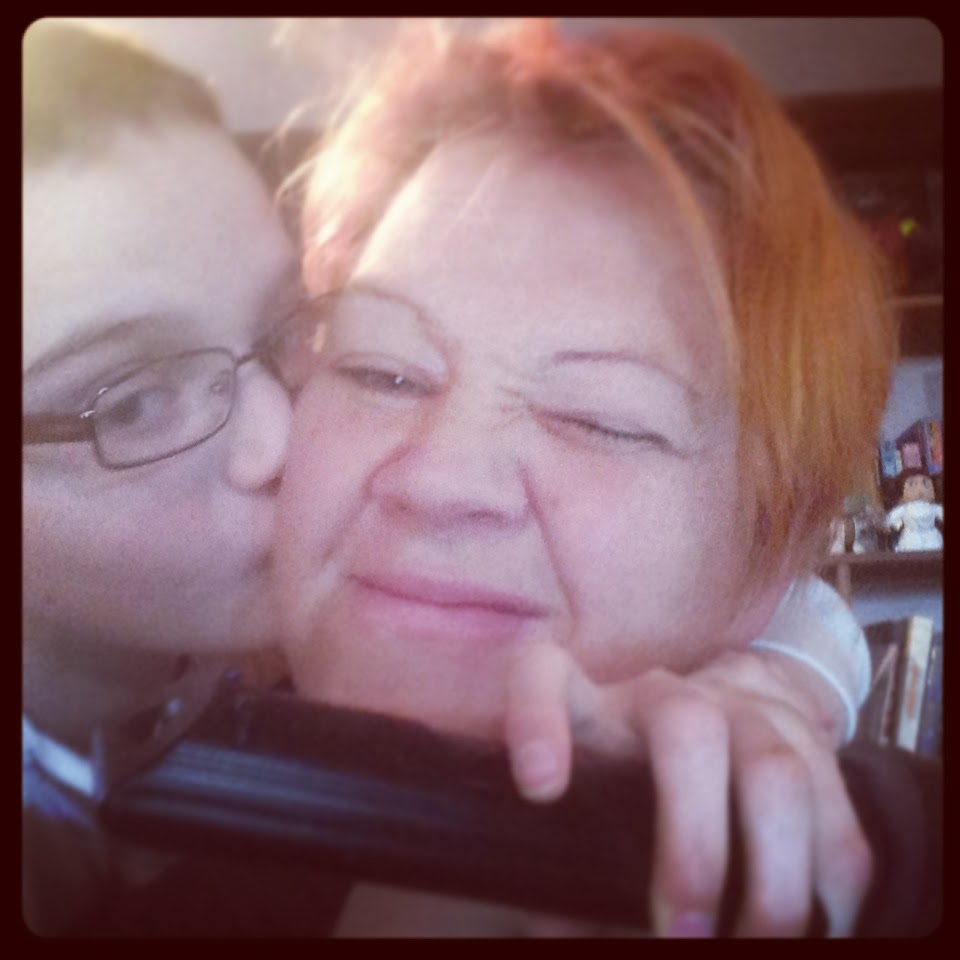 So, I guess it was a rite of passage for him and for me.  I have to learn to trust my instincts.  Being brave enough to be right the first time.