I am getting pretty excited for Christmas.  In no small part, because I am off for 4 days.  In a row.  Fuck yeah.

But I love Christmas.  It is so special and fun.  I always stress like crazy, about presents- did I get enough for everyone?  Did I get the right things?  Will people like them?  In the end, though, I guess it doesn't matter, even if they don't like them, they can always return them.  I just hope everyone knows that some real thought went into the gifts.  So if you don't like them, don't break my heart, don't tell me. :)  I also stress about decorations- did I do enough?  Too much?  Does everything look nice, or cheap?  I stess about baking, and cleaning and school, and work and everything else to do with the holiday.  It's like a tradition in and of itself.  I am trying to back off the stress a bit, and take it easy.  It's a work in progress. :)

There is snow this Christmas, which is fantastic.  I love white Christmases.  I don't know how people live in the south and don't have them.  Granted, we often don't have them here, but there is always the possibility, and that's what counts.

We aren't doing anything special this Christmas Eve.  Geoff and I both work through the day, and then the night will be last minute running around and prep for the next day.  We always open one gift on Christmas Eve, and that is everyone's Christmas pjs.  I still have to find a pair for Sebastian.  Boo.  If I am stuck, I will have to just get a pair of red or green ones, and make due.  But it will hurt my feelings.
Anyway, we open our pjs, and get ready for bed.  When the kids put out milk and cookies for Santa and carrots for the reindeer, then they toddle off to bed and hopefully to sleep.  After that.....Santa comes! 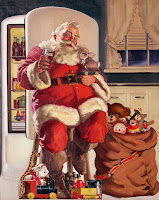 Yeah for Santa!!  I want my kids to believe in Santa until they are 45.  I don't care.  I love it.  Because of his issues, it has only been the last couple of years that Sebastian is really starting to grasp what it is that Santa does.  This year, he did awesome when he was talking to him, and even gave a list for Sawyer.  Sawyer loves the idea of Santa, but the "reality" of him is something she can do without.  I think she will be ok with getting gifts from him, though.  I think I just want both of them to be super stoked that Santa came.  I want them to always have that hope and happiness that comes with thinking about Santa.

I know they won't always have it, though.  Sad.

I remember having a conversation with my dad about Santa.  I had finally screwed up the courage to ask if Santa was real.  I think the previous year, I had woken up and caught my parents putting stuff under the tree, that was supposed to be from Santa.  Also, my mom was getting a little lax, and "Santa" gifts would appear under the tree much earlier than Christmas Eve, even though they were buried under others, and stashed in the back.  So I had my doubts, and some evidence to back it up.  I went to my dad for answers. 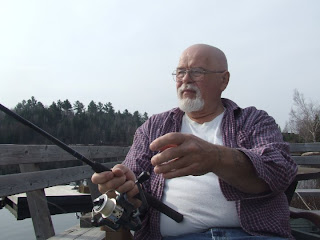 For those that don't know him, let me tell you about my dad.  He is a great guy, super handy, can do about anything that I ask him to do.  He is totally old-school, and very blue collar.  He is hard working, and rough around the edges, but super loving.  His grandkids ADORE him, and call him Papa.  He has mellowed a lot as he has gotten older, though.  This is the man that could strike fear in my heart with a raised voice.  I have confrontation issues to this day, because of my dealings with my dad.  But then, this isn't therapy, so we won't get into that.
With all that, my dad is not the most eloquent person on the planet.  Once in grade school, I needed a note for school, to show that I had my parents' permission to leave the school grounds for lunch.  I must have forgotten to ask my mother, because I got stuck with the note my dad wrote to my teacher, Mr. Weaver.

This is - literally- what it said.  Needless to say, I ate lunch at school, until I could get a note from my mother.

So, this is the man I asked about Santa.  Scary, huh?

Instead, he told me that what Santa really was- was the spirit of giving.  That as long as we believed in giving and charity and magic, that Santa was real.  Every kindness paid, and every smile earned, we celebrated Santa.

Wow.  I still can't believe that came from him. :) 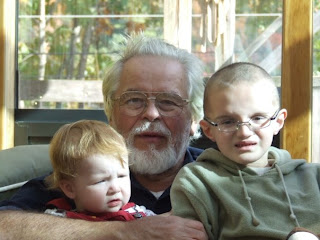 So, I think I am going to steal that, when it comes time for my kids to ask.  Way to go, Daddy-o.


Rosie N. Grey
The N stands for "non-believers get socks and underwear." 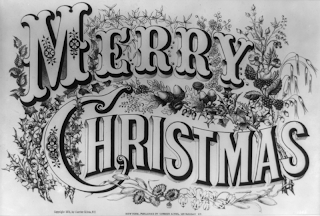